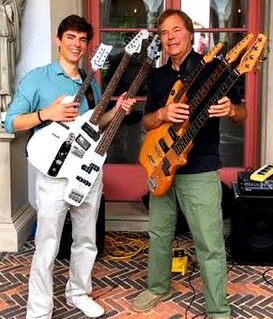 ​VILLA TERRACE - Shorewood Wisconsin - 2019
Jack Grassel and Garrett Waite played a two hour concert for a rapt audience in the courtyard. The program was their compositions and standards. ​This might have been the first time that two jazz musicians with triple neck instruments (mandolin, guitar, bass) played concerts together.  Mr. Waite graduated from the Berklee School of Music.   ( Photo by Anthony Waite )
Vihttps://garrettswaite.wixsite.com/music 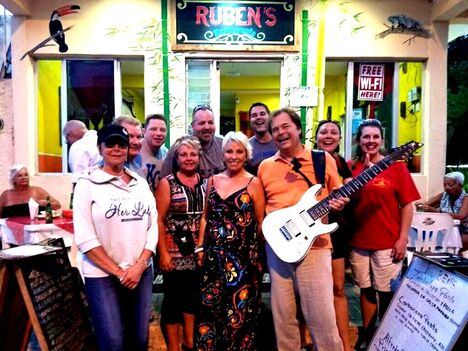 ​​​​ RUBEN'S - Isla Mujeres Mexico - 2017
​A fan in the audience snapped this picture of Jack and Jill in front of Ruben's after one of the 2017 gigs. We returned January and February in 2022 every Monday, Wednesday and Friday 5:30 to 8:30pm on the main stage. Ruben and his fine staff serve excellent Mexican food.  Located on the northern end of the island.  Amazing hot sauce, burritos, lobster and Dos XX beer (which tastes better in Mexico.)  Ruben was a saintly man, always putting other's needs before his own.  On a night in 2020, Jill was too sick to sing and stayed home.  Ruben paid her wages and offered to pay her medical expenses.  It was an honor to know and work for him.   The staff has taken over running the place and maintaining Ruben's high standards of food and friendliness.  We miss you Ruben. RIP 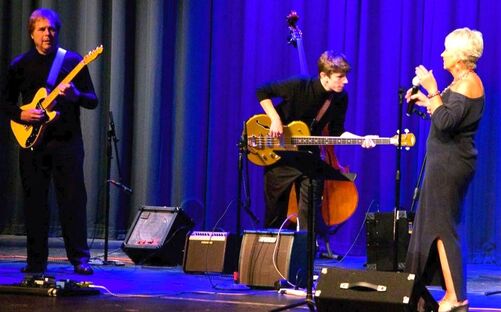 ​ KETTLE MORAINE H.S. - Wales Wisconsin - 2016
Jack and Jill accompany Garrett Waite (Jack's student at the time) in his fantastic senior graduation concert in which he presented the skills he had mastered so far in various genres of music and theater.  Mister Waite graduated from the Berklee School of Music in 2020 and is a fantastic musician. 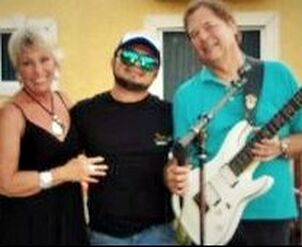 ​ EL PATIO HOUSE OF MUSIC - Isla Mujeres Mexico - 2015
Rap artist Tacuako sat in with Jack and Jill frequently during their 2015 Mexico tour.  This brilliant man knew the changes and song forms of every standard we played, improvising amazing vocal solos.  Tac hired Jack and Jill to compose and perform a track with him on his new CD.  It was released simultaneously in Mexico on his compilation CD and in the United States on the JACK 2015  CD.  It's available on this site's shopping cart. 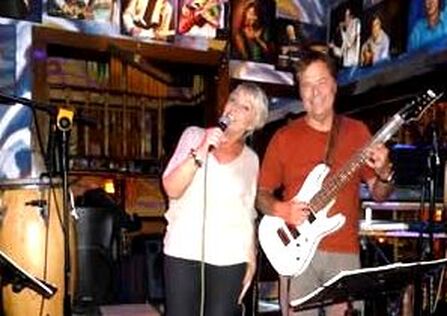 Jill Jensen-voice, Jack-guitar
​
​LAS PALMAS - Antiqua Guatamala - 2014
This was the first gig with Jack's new Schecter 8-string guitar. Below the normally tuned  6 guitar strings are two more: a low B and ​a low F# which means it's possible to play bass notes and ​guitar notes on the same neck. The owner of this fine venue is guitarist / vocalist Renee Deleon. Las Palmas has live music 7 nights a week with Renee playing jazz with multi-instrumentalist Carlos on Tuesdays along with excellent food. It was fun playing on this stage. 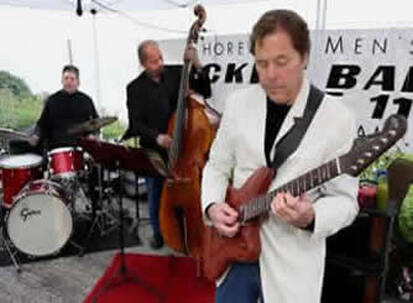 Dave Bayles-drums, John Price-bass, Jack-guitar (Johnny Padilla-sax, David Stoller-piano: not in picture)
​
ATWATER BEACH - Shorewood Wisconsin - 2011
It was 57 degrees on the shore of Lake Michigan. The audience was wrapped in blankets cheering the band. Repertoire was the compostions of Mr. Padilla.  Jack's guitar was built by master luthier Dan Smocke out of Bubinga, Rosewood and Wenge tone woods with stainless steel frets and custom replica inlays from a 1910 mandolin.   Click this link to see photos of Dan working on the guitar: ​ http://guitarinternational.com/2011/05/01/jack-grassel-and-dan-smocke-interview-building-the-perfect-guitar/ 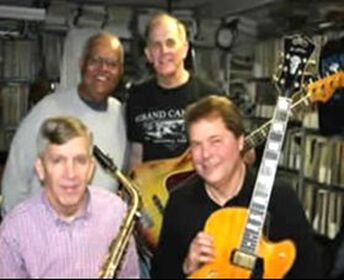 ​ JAMEY AEBERSOLD'S STUDIO - New Albany Indiana - 2009
Traveling to a gig on the East Coast, Jack stopped to eat lunch with Jamey, tour his facility and play some music with Mr. Aebersold and his band. Jamey demonstrated his multitasking by playing saxophone, piano, while operating recording equipment, answering emails, and photographing without missing a beat of music. See examples of Mr. Aebersold's work at:  www.jazzbooks.com/ 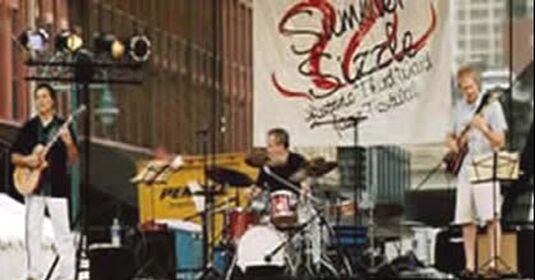 ​​ SUMMER SIZZLE FESTIVAL - Milwaukee Wisconsin - 2008
On tour for the GHOST RIDGE  CD:  Kirk Tatnall and Jack created custom guitars allowing them to play bass and guitar simultaneously with drummer Dane Richesen. They played Jack's 70 compositions for 13 years at The Uptowner and recorded the LIVE @ THE UPTOWNER CD with drummer Ernie Adams.


​ SALAMONE'S - Fort Atkinson Wisconsin - 2005
The band "45 RPM" opened the concert with a fiery set of rock and roll. Jack and vocalist Jill Jensen joined them to open the second half. Randy is a powerful presence on stage. ​​​Jack and Randy hadn't played together before this night though they've been friends since meeting in 2nd grade at age 7. 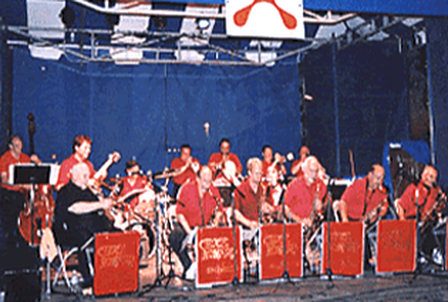 ​​SUMMERFEST JAZZ STAGE - Milwaukee Wisconsin - 2003
Jack worked 25 years with the Chuck Howard Superband playing custom Walt Stuart charts. The finest player available was in each position. (It was essentially a guitar trio of Jack, bassist Tom McGirr, drummers Mike Lorenz, Steve Zenz or Jack Carr and 10 horn players without a piano.)  ​ This was the last gig of the band. Chuck retired, sold the music and died a few years later.  He and his great band are missed. 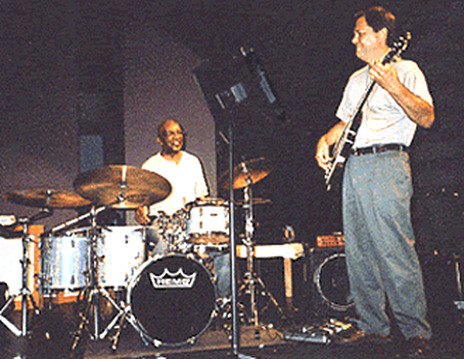 L-R: Ed Thigpen, Jack, John Price (not in picture)
​
​ WLC JAZZ FESTIVAL - Milwaukee Wisconsin - 2000
Jack and bassist John Price accompanied Ed Thigpen for a concert at Wisconsin Lutheran College.  Ed enjoyed playing with Jack and John so much that he called in 2002 to hire them again for 2 gigs at Caroline's Jazz Club and another concert at the college.  Jill Jensen sang "Denise", Ed's tribute to his daughter. Mr. Thigpen "brought down the house" playing melodies with his elbow on his small tom while John and Jack played what Ed called "that goofy funk vamp". ​ 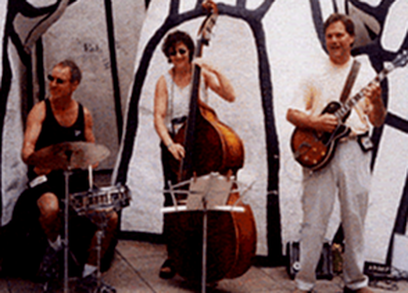 ​ MUSIC EVERYWHERE CONCERT - Chicago Illinois - 2002
For one awesome summer, the mayor of Chicago created a budget for musicians to play hundreds of concerts on streets all over the city. Paul arrived by bus with a snare and cymbal. Marlene was great at sight reading Jack's compositions. This was the only time this great trio was to play together.  Mr. Wertico was a guest artist on Jack and Jill's CD,  IT'S ABOUT THE MUSIC.  Marlene played on Jill's CD,​ SEEMS LIKE DREAMS. 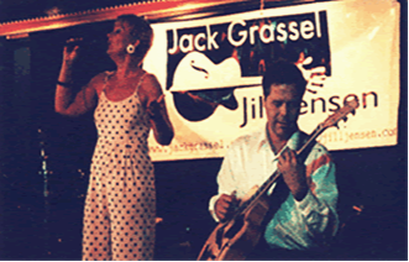 L-R: Vocalist Jill Jensen, Jack
​ CAROLINE'S JAZZ CLUB - Milwaukee Wisconsin - 2002
Review: "What happens when you take one of the nation's top jazz guitarists, add one of Wisconsin's favorite vocalists and throw in the chemistry of two people in love? This duo sizzles onstage. Jill's expressive voice sparkles with the sheer delight of singing as she wraps around the lyrics and their emotional implications, blended with Jack's stunning command of the guitar." 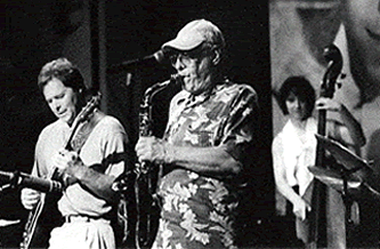 L-R: Jack, Ira Sullivan, Marlene Rosenburg
​
​ THE JAZZ SHOWCASE - Chicago Illinois - 2002
Multi-instrumentalist Ira Sullivan is beyond the cutting edge of virtuosity. Audience jaws dropped as he played alto, tenor, trumpet, soprano and flute, as if each were his main ax.  A Bill Klewitz photo

​ THE PFISTER HOTEL - Milwaukee Wisconsin - 2001
This trio played every Friday and Saturday for seven years in a wonderful glass walled room called "Blu" on the 23rd floor of this historic hotel.  On a clear day it has the best view of Lake Michigan in the city. Jack began playing here in 1972. He played with Al Martino, Trini Lopez, John Gary, Lana Cantrell, Gloria Loring, Jimmy Rodgers, ​Lani Kazan and many other stars during the 6 night a week name artist policy. 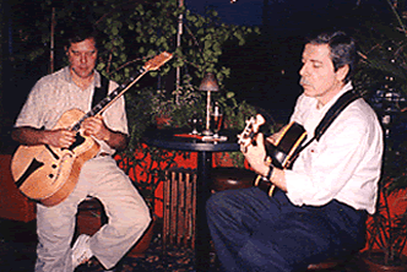 L-R: Jack, Bill Martin
​
​ CAROLINE'S JAZZ CLUB - Milwaukee Wisconsin - 2000
During this concert, the electricity went off. Club owner Caroline immediately lit candles. Jack and Bill left the stage, sat in the audience and played acoustically. The ever cheerful bartender Scott distributed free drinks. The audience listened quietly while the duo played a set of standards. ​(Augie Ray was there with his camera to capture the moment.) 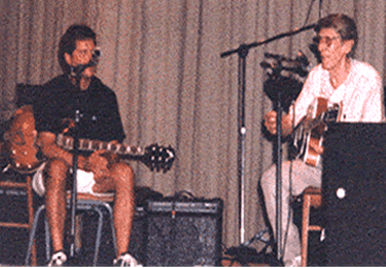 L-R: Jack, Tal Farlow
​
​ NATIONAL GUITAR WORKSHOP - New Milford Connecticut - 1997
From 1994 to 1998 Jack was on the faculty at NGW. 500 guitarists jumped to their feet cheering after the last tune of Tal and Jack's concert. This was to be Mr. Farlow's final concert. Tal had a unique style using many techniques he pioneered. Jack studied with Tal from 1993 until his passing in 1998. Jack and Tal's CD, TWO GUYS WITH GUITARS was recorded at Tal's house. 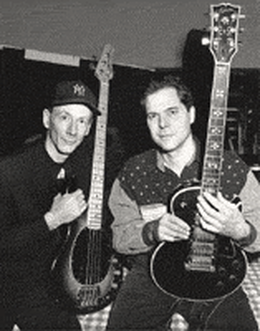 ​ KALT'S RESTAURANT - Milwaukee Wisconsin - 1994
This picture was taken at Jack's SOLO BURNER CD release concert. "Solo "Burner" was Jack's first solo guitar CD and is still available.  With them that day was Ernie Adams -drums, Berkeley Fudge-saxophone, and  ​Jeff Pietrangelo-trumpet. Flamenco guitarist Peter Baime played for the preceeding dinner. Jack and Rick worked weekly at Kalt's as a duo for two years.​​( Thank you Henry Kalt, one of the best club owners we have ever worked with.) 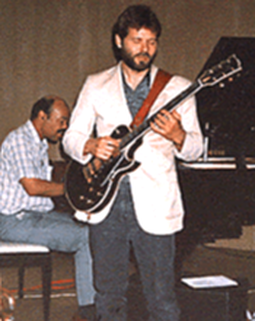 
​THE UNIVERSITY OF WISCONSIN - Milwaukee Wisconsin - 1983
Keyboard virtuoso Melvin Rhyne lived in Milwaukee Wisconsin from 1980- 2000 before moving back to his native Indianapolis. Not only is he an incredible pianist, but Mel was a pioneer of the jazz organ, recording with Wes Montgomery in the 60's. Most recently he is breaking new ground with multiple keyboard performance. ​On his 1998 CD, TRACKS, with Jack, drummer Andy LoDuca, and trumpeter Jeff Pietrangelo. TRACKS is the only CD of Mr. Rhyne playing numerous electric keyboards simultaneously while creating incredible bass lines at the same time. 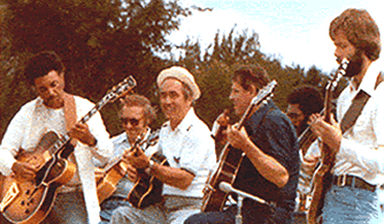 L-R: Guitarists Manty Ellis, Bob DeBlay, Don Momblow, George Pritchett, bassist Skip Crumbey Bey, Jack Grassel, and drummer Dave Ruetz (not in picture).
​
​
​ COUNTY  CONCERT SERIES - Milwaukee Wisconsin - 1975
A legendary concert by five of the top guitarists in Milwaukee at the time. Someone in the audience yelled "You guys sound like The Ventures on acid."  ​In his formative years, Jack studied with George Pritchett and Don Momblow. Don was a chord master. George had very advanced unique technical concepts and turned Jack on to Moshay picks. 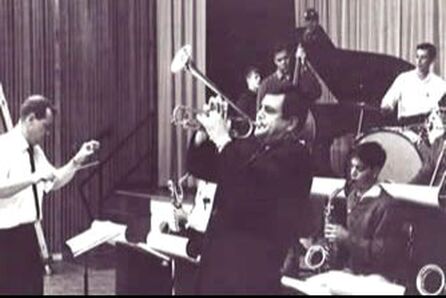 Jack Whitney - director, Dick Ruedebush - trumpet
​UNIVERSITY OF WISCONSIN - Waukesha Wisconsin - 1967
That's Jack playing bass in his first year of college. Playing jazz on the upright was his transition from rock bass (pictured below) to jazz guitar (pictured above). Trumpet virtuoso Dick Ruedebusch had played with The Woody Herman Herd before settling in Waukesha and leading a band at Tumblebrook Country Club. Jack Whitney is a fine teacher who was able to transfer his love of music to his students. He introduced Jack to very important jazz records which influenced his decision to be a jazz artist instead of a rock musician.

​ RON & THE CONTINENTALS - Oak Creek Wisconsin - 1963
This band played for 2 years of Fridays at Youth Centers, Saturdays at C.Y.O dances and weddings, averaging 80 gigs per year. The repertoire was the pop music of the day: Elvis, Buddy Holly, and Little Richard. Jack is 15 years old here playing one of the first Japanese basses through his new 1964 Fender Bassman amp. Bob Szweda the guitarist is using a 1963 Fender Showman with a 12 inch JBL which was a new groundbreaking speaker. ​Hear Rebound Baby, the 45 rpm record they made in 1961 at
​Cuca Records: https://www.youtube.com/watch?v=kGX6FtZQXu4 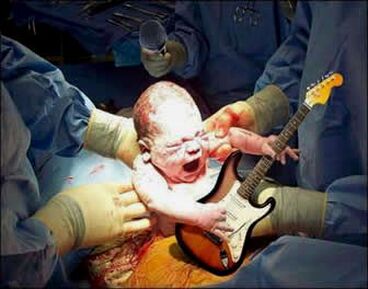 ​​ MOUNT SINAI HOSPITAL - Milwaukee Wisconsin - 1948
Jack is playing in public the first time, after practicing privately for 9 months. He's crying because all that time he hadn't had an amp for his Stratocaster. He said "goo wa goo wa wa waaaaa".  Mom didn't understand and got Jack a Wa Wa Pedal. What he really meant was "Mom, I need an amp". His mother sent the guitar to Leo Fender because Leo was looking for a new guitar design. He marketed his first Stratocaster based on this design and sent Jack an amp and a new Strat.  Jack is the first born, a virgo and has perfect pitch. He started lessons at age 3, competed in the National Accordion Championship Contest in Chicago in 1953 at age 5 and started touring with The Bar O Ranch Variety Show at age 6, getting his first paycheck on July 12, 1954.  (The check was recently discovered in Dad's souveneirs.)