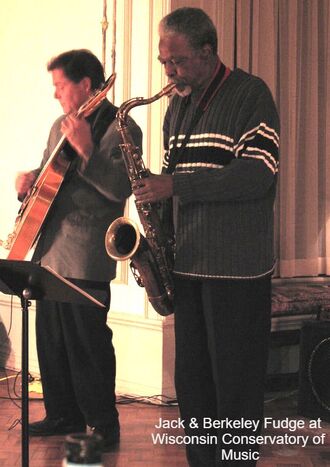 ﻿﻿Matthew﻿﻿: How has technology changed the landscape of guitar education and where do you see it headed in the future?

﻿﻿Jack: With the current availability of mass instruction, it's more difficult than ever to create your own voice and even find a good teacher. When Frank Zappa
auditioned players, he looked them in the eye and said, "What do you do that's fantastic?" and "What can you do that no one else can do?"  When hiring teachers at Milwaukee Area Technical College, I would also ask those questions. Nine out of ten applicants recoiled and couldn't give an answer. Approximately 1 out of 10 applicants confidently answered those questions. Needless to say, I wound up with an incredible, fully-functioning faculty that turned out extraordinary musicians. Remember that most of the great music legends were self-taught. They didn't have the internet, instruction books, DVDs, teachers or music schools: Charlie Parker, Stevie Ray Vaughn, Tal Farlow, George Van Eps, Lenny Breau, Johnny Winter, Eddie Van Halen, McCoy Tyner,
Elvin Jones, Roy Haynes, Gary Peacock, Jaco Pastorius, Keith Jarrett, Sonny Stitt, Thelonius Monk and Wes Montgomery  were self taught musicians. They can play one note, and you know exactly who it is. What degrees do these guys have or what school did they attend?  You don't know, don't care and it doesn't matter, it's about the music. Actually, everyone is mostly self taught because practicing a musical instrument is a solitary activity without a teacher being present. ​ How well do you practice?  Do you practice correctly?  Do you advance as a result of your practice?  When I was chairman of the MATC music department, my challenging goal was to create "one of a kind" musicians within a school environment. When I hear those students now, I know that I've achieved that goal. They all graduated from the same place, but don't sound like each other or any of their teachers. They sound like themselves. In 1972, early in my carreer, numerous audience members would say, "Jack you sound like Wes Montgomery, or like John McLaughlin or like Pat Martino. I responded by not listening to a single guitar player live or on record for the next ten years, which was how long it took for me to start sounding like myself. Now folks say, "Jack, you don't sound like anyone I've ever heard." I still don't listen to many other guitar players these days. I have worked hard to create my individuality and maintain it.
﻿﻿﻿﻿
MW: How did you get your start as a teacher?

JG: I had been playing 2-3 gigs per week on upright bass and bass guitar when I was 12 years old. To supplement my income, I started teaching bass guitar in a music store at age 14. I made more money teaching than having a paper route which is usually the only employment available to a young teenager. One day the store owner ﻿﻿said ﻿﻿if I taught guitar, I could recruit more students. Since I didn't have a guitar he sold me a warped neck Harmony archtop without a truss rod for five bucks that the previous owner had painted glossy orange with a paint brush using "Farm Implement Enamel". Ha Ha. Having never played guitar before, I bought Mel Bay's 8 books and practiced all day.

MW: Did any of your teachers have an influence on your teaching approach?

JG: I wasn't interested in what was being taught in schools or the way the information was delivered. My teaching approach became based on what I would like to receive as a student. I had a great college theory instructor, Ted Ashford, who wrote on the board the 1st day of class, "You don't have to learn this stuff,  you will have to compete with someone who did."  He would come in to class and ask "what do you want to do today?" putting responsibility on the students for the outcome.  He was a jazz pianist, with a doctorate from Julliard, who only taught at my school for two years before quitting to join the rock band FOOD in Los Angeles. He was the finest teacher I've ever encountered. He had written the required theory book the class used which had every genre of music in it. I was afraid to miss even one class during the entire year. Each class (5 times per week) was unique and mind blowing. Occasionally he would have his trio and other musicians in to be interviewed and give a concert. John Cage was a guest twice. Every Friday, we were required to come to class with a piece we had composed and perform it. Underage, I would sneak into ghetto bars late at night to hear him play creative music with his band. Everyone in that class turned out to be a powerful musical force. I dropped out of college when I found out he wasn't going to return the next year. I have always used Ted Ashford as a model. I asked him one day, "Mr. Ashford, how can I get gigs?" He said, "Jack, go home and practice". I practiced 15 hours a day for six months. Then gigs started to appear and ﻿have continued for the last fifty years. I recently went over the ​14,000 gig mark.
﻿
MW: You have written a number of instructional books and recently released an instructional DVD.
How did you approach your publications as compared to how you approach a private lesson?

JG: ﻿Those books were originally written as things for me to practice. When I began studying the guitar I discovered there wasn't advanced material in print to help me get where I wanted to go as a guitarist. In general, I've found that most guitarists aren't very original. (John Coltrane, Eric Dolphy, Bill Evans,
Thelonius Monk, Jackie McLean, Joe Henderson and Charlie Parker didn't have guitarists on their most ​influential recordings for a reason ). I've worn out 3 copies of  "158 Exercises for Saxophone" which is what Trane used to practice every day. There aren't many books for advanced guitarists because
there is more money in creating books for beginners. Classical clarinet etude books are great things to practice because the clarinet is three octaves just like the guitar and not written for guitar. Befkeley Fudge, at left, was a fine teacher, role model and great musician.

I created my teaching methods to help myself and others to develop an original musical voice. I found it difficult
to develop my own unique style when practicing materials which conveyed and cemented the common weaknesses of guitar technique instead of transcending them. Saxophonist Sam Rivers practiced his own exercises so he wouldn't sound like Coltrane. If I teach someone, the approach is unique to that student. I help them ​create their own practice materials and achieve their own vision so they sound like themselves, not me.

﻿MW: You are such an experienced and accomplished performer as well as an educator. How has your teaching experience influenced your performing and vice-versa?

JG﻿: In 1994, I was at Tal Farlow's house. I told him how frustrated I was with my playing and that I hadn't improved for a long time. He asked what I did all day. I said that I taught 40 guitar students per week. He said, "Jack, you're hearing your instrument played poorly 40 hours a week and you are the product of your environment". Since I was head of the MATC music department at the time, I immediately hired a guitar teacher and stopped
teaching guitar.  Instead, I taught Music Appreciation class which involved listening to and discussing recordings by the greatest creative musicians who ever lived.  I scheduled those classes in a different part of the building so that I never heard anyone play the guitar except me. In addition, I exclusively played my 70 compositions on most gigs. (Wayne Shorter, Thelonius Monk, Jackie McLean and Horace Silver did that.) It didn't take long for my playing to improve. I was playing a gig with Melvin Rhyne, who had played with Wes Montgomery. He said to me, "Jack, music is everything you do."  I began to make different choices as to what I did all day.﻿

MW: What advice do you have for people who are just starting to teach guitar?

JG: ﻿I think you have to have a clear vision of what you want to do. Do you want to be "a musician who teaches guitar" or "a guitar teacher who plays music" or
"a music teacher who plays a bunch of instruments". There is a big difference between them. During the years when I taught, I vigilantly maintained my identity of a player who is teaching. It resulted in choices which aligned with my ultimate playing goals. Teachers who play instruments could be better players if they would turn their thinking around the other way.
​
MW: What advice do you have for students when they are looking for a private teacher?

JG: ﻿ First, you need to know what you want to do.  Second, learn who the best teachers are to help you do that. I didn't care where my teachers lived, I found a way to get there and pay for it. I drove 16 hours each way from Milwaukee to New Jersey many times   for four years of lessons from Tal Farlow. I flew to Los Angeles, rented a car, and drove 4 hours to each lesson with George Van Eps. I drove 2 days to New York for a lesson with Billy Bauer. It was expensive, but those guys are dead now.  Last week,  I flew to L.A. to study with Jimmy Wyble. You can always make more money, but great teachers may not always be available for you. I've driven 23 hours to Toronto from Milwaukee numerous times, just to hear some of the legends play. You can't duplicate the experience of hearing someone live, in the same room. A teacher, unfortunately, without knowing it, can relay poor playing, incorrect teaching and ineffective practice habits to students.  As a student (which we always should be) one needs to consistently put in the many correct practice and performing hours that are needed to become a fine musician (and a fully functioning-healthy-​constructive human being away from the instrument). For the best learning to happen, both the teacher AND the student need to do what is required.